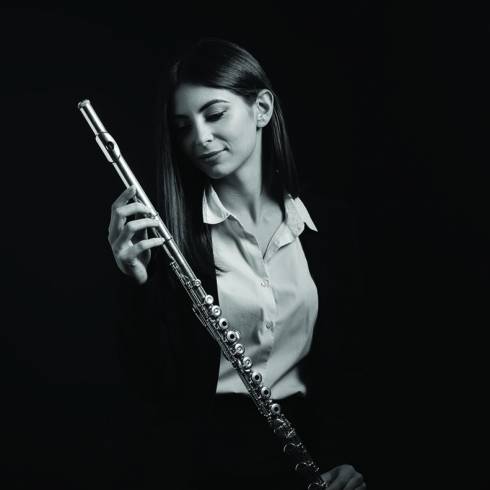 Born in Bergamo in 1998, Irene Sacchetti began studying flute at the age of nine with Paola Proserpi and then with Anna Facoetti. After graduating from “P. Secco Suardo” music high school in the class of Ombretta Maffeis, she continued her flute studies at the “Gaetano Donizetti” Conservatory in Bergamo with Paola Bonora, where in 2020 she graduated with full marks and honors, then specializing with Gianni Biocotino at the "Guido Cantelli" Conservatory in Novara. In parallel to the flute, she deepened the study of opera singing, followed by the singer Tiziana Fabbricini. She took part in numerous master classes with teachers of national and international caliber such as Silvia Careddu, Salvatore Lombardi, Maurizio Simeoli, Shimizu Kazutaka, Domenico Gustafierro, Marco Zoni and in Belgium with Marc Grauwels. Since 2010 she has participated and won numerous national and international flute competitions, including the award as best solo flautist at the "Civica scuola di Musica, fondazione di Milano" (MI) national competition, the First prize at the "Giuseppe Peloso" (PV) competition for young flute players, First prize at the "Lodovico Agostini" (FE) national music competition and the first prize at the “Città di Cremona” (CR) international competition. In 2017 she received the "Music and Nature" chamber music award in Switzerland, which will allow her to be a guest of important concert exhibitions. In parallel with the solo aspect, she performs in several important orchestral formations, collaborating with the Donizetti Conservatory Orchestra of Bergamo in various events in the province; thanks to it she will take part as the first flute in the International Piano Festival of Brescia and Bergamo, conducted by Fabrizio Maria Carminati. In 2018 she performed with the Sinapsi Opera Orchestra & Choir of Rome at Basilica di San Pietro in Tuscania, collaborating with soloist of clear renown and directed by Isaac Karabtchevsky. In 2019 she performed at “Hotel de Ville de Wavre” in Belgium during the “Rencontres Musicales Internationales en Wallonie”; in the same year she collaborated with Orchestra Italiana del Cinema (O. I. C.) in a series of concerts concerning film’s soundtracks, conducted by Timothy Henty and Benjamin Pope at the Teatro degli Arcimboldi in Milan, and then at the MGM Cotai Theatre in Macau (China), under the direction of Shih-Hung Young. She also performed on the award ceremony of the city of Bergamo as a UNESCO Creative City at the Palazzo Pirelli’s Salone Belvedere-Jannacci, in Milan. In 2020 she was the winner with special mention of the “Samnium University of Music Audition Awards” international competion, which will allow her to take part in a concerts tour in some of the most prestigious concert halls such as the Teatro Romano in Benevento, the Teatro di Ostia Antica in Rome and the Musikverein of Vienna. In duo with guitarist Fabio Bussola, a stable formation since 2013, she performed in numerous concert exhibitions in Italy and abroad and took part to many master classes with some of the most influential people of the field, such as Giulio Tampalini and Roberto Porroni. They won various international competitions such as the International Competition “Città di Favria” and the International Competition “Città di Cremona”. In 2016 they were invited to perform in several episodes of the television broadcast “Ciao Gente”, dedicated to young Lombard talents and then in 2017 they were selected by L’Eco di Bergamo for the series of interviews and performances “Protagonisti”. Dedicatee of composition by contemporary authors such as Marco Bussola (Atmposphère for flute and guitar dedicated to Irene Sacchetti and Fabio Bussola) and Alessandro Chiantoni, from the latter she was entrusted with the first absolute performance of the compositions “Dialogue n. 1 Op. 5” and “Chant d’Oiseaux Op. 7”, piece dedicated to her. Among the chamber formations, she took part with Quintetto Elisir in important concert exhibitions held in the province of Bergamo and Brescia, including the International Piano Festival of Brescia and Bergamo and the Aldebaran Music Festival.