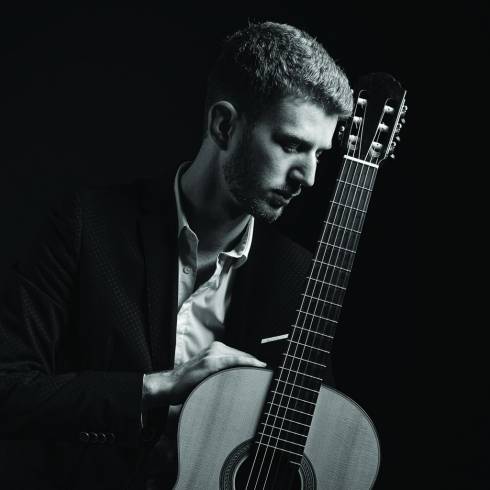 Born in Bergamo in 1998, he began studying guitar at the age of nine with Ivan Bracchi, then attended the “P. Secco Suardo” music high school in Bergamo with the guitarist and composer Giovanni Podera and the “Gaetano Donizetti” Conservatory of the same city with Luigi Attademo. From 2015 to 2019 he studied with Andrea Dieci and Bruno Giuffredi in the “Giulio Regondi” guitar Academy in Milan. In 2020 he graduated with the highest marks, honors and special mention at the “Guido Cantelli” Conservatory of Novara. He has participated in master classes with internationally renowned teachers such as Giulio Tampalini, Frédéric Zigante, Javier Riba, Andrea De Vitis, Christian Saggese, Lucio Matarazzo, Massimo delle Cese and Marco Tamayo. In addition to performing in Italy and abroad as a soloist and in various chamber formations, he won more than twenty national and international guitar competitions, including the first prize at the 12° edition of “Città di Voghera” international competition, the first prize for two consecutive editions in “Città di Favria” international competition and the first prize with special mention in “Città di Tradate” guitar competition. In 2015 he was awarded the 29° “Lino Barbisotti” scholarship edition in Bergamo, in 2016 he won the “Mauro Fantinelli” international interpretation award and in 2016-2017, for two consecutive editions, he won with the flutist Irene Sacchetti the “Music and Nature” chamber music award in Switzerland. Since 2018 he has been the winners of several prizes and competitions, including the first prize at “Giorgio e Aurora Giovannini” guitar competition in Reggio Emilia, the first prize for two consecutive editions in “Festival Corde d’autunno” international competition in Milan, the first prize in “G. Marziali” competition in Seveso and the first prize in “La chitarra volante” national competition in Brescia. In 2019 he was awarded the “Francesco Vaccari” scholarship and he played in many guitar festivals, including the prestigious “Il Mondo della Chitarra” guitar festival in Novara, which every year hosts important international artists. In 2019 and 2020 he won for two consecutive editions the “Seicorde Academy” award, assigned by the Masters Andrea Dieci, Christian Saggese, Giulio Tampalini, Marco Tamayo and Filippo Michelangeli, the “Suonare News” and “Seicorde” director. He recently took part in a “Seicorde – I Maestri della Chitarra” recording project and will record a new CD the next year. In 2020 he won the “Giancarlo Facchinetti” award for best young performer of the “Seicorde Academy”. He recorded the works of the guitarist and composer Giovanni Podera and other works dedicated to him by contemporary composers such as Luigi Artina, Kevin Swierkosz-lenart and Franco Balliana. Many of these recordings are published for the “Sinfonica” publishing house and the “ZeroCrossingRecords” label. In 2020 he released his first video for the important german label “SiccasGuitars”, brand followed for the performance publications of famous and young guitarists from all over the world. He is currently studying at the “Guido Cantelli” Conservatory in Novara with Bruno Giuffredi.