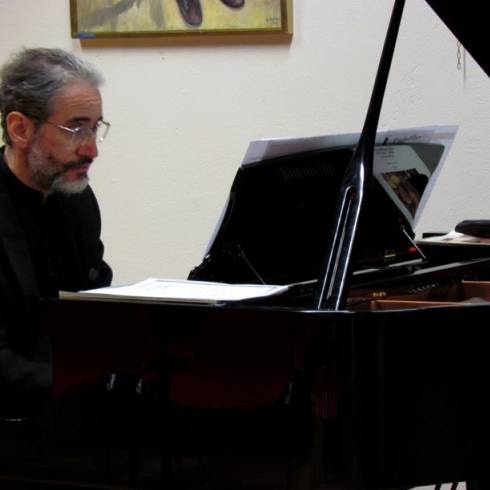 Born in Alessandria in 1958, Pianist Roberto Beltrami graduated with honours in piano and composi-tion at the Niccolò Paganini Conservatory of Music in Genoa under the tutelage of Franco Trabucco and Adelchi Amisano, respectively. Afterwards, he studied with Michele Campanella and followed Improvers Courses with Vincenzo Vitale, Franco Culli, Enrica Cavallo, Bruno Giuranna, Massimilia-no Damerini and chamber music with the Trio di Trieste.
Winner at severa! national and international piano and composition competitions (Genoa, Milan, Na-ples, to name few) he performed with many renowned musicians: Anton Niculescu, Claudio Merlo, Maurizio Cadossi, Angela Jones, Milton Masciadri. Furthermore, he served as Renato De Barbieri e Hermann Krebbers' piano accompanist at the Improvers Courses at Mezzolombardo, Italy.
Some of his compositions published by Pizzicato Verlag Helvetia, have been performed in Italy, Canada, Germany, Ireland, Hungary and United States. Moreover, he composed incidental music far a theatrical production directed by Alessandro Quasimodo. In 2005, his composition Secondo Quartetto per archi has been selected and performed by the renowned Penderecki String Quartet at the Casalmaggiore Summer Festival. As far as Roberto Beltrami's composer recordings is concerned, the musicologist Angelo Gilardino says: "You may capture [ ... ] the musician's ethical and artistic strain whilehe's submitting toa lonely screen his purchases of a varied and susceptible to incentives culture, but also endowed by strong ant1bodies ".
In 2003, he was invited as a guest professor at the Hugh Hodgson School of Music at the University of Georgia in Athens, GA, USA and made numerous concert tours as a member of the Trio di Alessan-dria performing a program featuring Alfredo Casella's Triplo Concerto. Afterwards, he served Angela Jones, flutist and Milton Masciadri, double bassist as Collaborative Pianist at master classes given by these renowned American musicians at the Antonio Vivaldi Conservatory of Music in the Erasmus Exchange Project contest.
After a competitive state examination, Roberto Beltrami was appointed Professor of Piano in 1995, and since then he has served as Piano Accompanist at the Arrigo Baita Conservatory in Parma and afterwards at the Antonio Vivaldi Conservatory of Music in Alessandria, Italy where he lives and teaches also Lieder Literature.