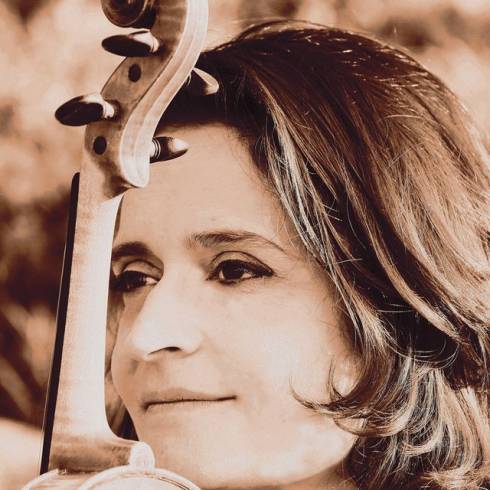 Graduated in 1994 with full marks in violin at the Conservatory "L.Cherubini" in Florence under the guidance of Professor Miriam Sadun . In 2004 she obtained the Biennio Specialistico in violin soloist with full marks ( 110 cum laude) with the Maestro Alberto Bologni at the musical institute "L.Boccherini " of Lucca, in 2006 she obtained with full marks the degree in musical disciplines and in 2010 she obtained the diploma of viola at the Institute "P.Mascagni" of Livorno. She specialized in chamber music with the Maestros P.N. Masi, F. Rossi, R. Russo. From 1995 to 2001 she was a member of the Orchestra Cantelli di Milano( for which she was the overall winner of the competition), of the Orchestra Sinfonica di Sanremo and from 2001 to 2011 of the Camerata Strumentale Città di Prato. She has won many violin competitions as a soloist and she attended study courses with Maestros of the calibre of Corrado Romano, Pierre Amoyal, Ruggero Ricci and with the shoulder of Kirov of Saint Petersburg, Mr. Vladimir Ovcharek. She is currently a partner of the Orchestra da Camera Fiorentina and collaborates assiduously with the Orchestra Nazionale della Rai di Torino, with the Maggio Musicale Fiorentino and other important concert foundations. She is the first violin of the string quartet Crazy Quartet , she also collaborated with the jazz pianist Stefano Bollani, with whom she recorded the "Gnosi delle Fanfole" and "Abbassa la tua radio", with pop singers such as Vecchioni, Antonacci, Pausini, Audio2, Sting, Bowie, Zucchero, Bocelli, Vallesi, Masini and with actors like Pamela Villoresi and Manuela Kustermann . She participated in several recordings, recording the sonatas of Boccherini for violin and piano in 2009 and a monographic cd with music by Carlo Prosperi. She is the role teacher for the violin, viola and chamber music classes at the Liceo Musicale Dante in Florence.
She plays a Serafino Casini gold medal published in 1932, a 2019 Fagundes, a 2000 Hiroshi Kugo and a 1764 Klotz viola.