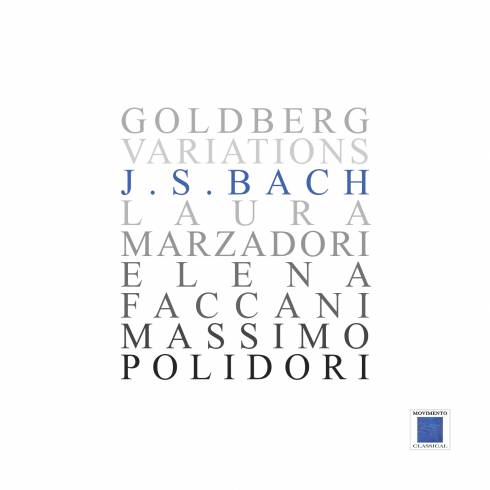 There is no doubt that Goldberg's Variations, written in the key of G major, between 1741 and 1745, are the highest goal of Bach's philosophical speculation regarding the profound correspondence between music and mathematics.
They consist of an initial Aria with the function of introducing the theme, which will then be subject to 30 variations. The same Aria appears again at the end as the conclusion of the work. lt is easy to observe that 30 is the produci of three times ten and in this regard, given the initial premise, we can only confirm that the symbolism of the number 3 is constant and, at the same time, fascinating. The number three represents the spiritual sign of creation, since it symbolizes the action of divinity in the world. Each human being, in its own essence, is double in its polarity and triple in its structure. And it is no coincidence, therefore, that in most cases the indication of time is three beats per measure. Only sometimes the indication of two beats per measure appears and, in doing so, the relation of frequencies is almost exactly 3/2, perfectly reflecting the symbolism of the number three just mentioned.
The 1O symbolizes the completeness that can be summarized in the circle, a geometrically perfect figure. Analyzing all 32 pieces, it appears clear that they report all the same base line of the Air and are, in turn, long 16 or 32 beats, except for the variation 16, consisting of 48 beats (16 + 32). lt thus becomes the centre of attraction of the entire composition. lt does not escape the attention of the interpreters that each third Variation is a Canone, with two voices that are inserted equal to rising distances, in unison, to the second, to the third and so on.
These mathematical relationships, which Pythagoras firstly investigated in ancient times, make music one with the motions of the soul and, therefore, oversee the boundless emotional universe that characterizes every human being. Those who listen to Goldberg's Variations are in fact dragged into a sound wave that blends lnvention and Logie, Pathos and Logos, melody and harmony, in a perfect union between the microcosm, which represents the human being, and the macrocosm, or the Universe, symbols whose origin is lost in the mists of time and which are widely diffused in Rosicrucian and Masonic rituals. AII this extraordinary complexity and the "Ancient Polyphonic" harmonies, were the basis of the so-called "Bach Renaissance", which look piace only in 1800, after a period in which the great composer was guilty forgotten. The advent of Felix Mendelssohn, his countryman, contributed in a decisive way to the re-evaluation of his music and his thought, which make Christianity a religion of man aiming at the divine. 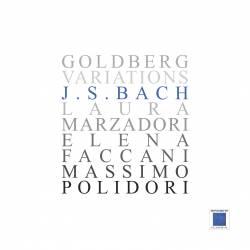 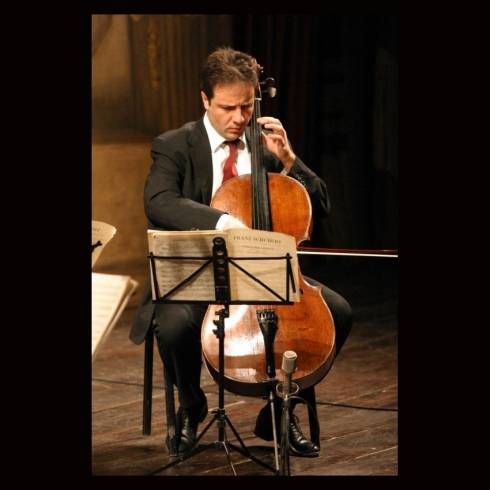 Born in Turin, Massimo Polidori completed his first studies with Maestro R. Brancaleon in the Musical Academy of his city, obtaining a diploma as a violoncellist with full marks. Later, he went on to perfect his studies with A. Janigro, M. Brunello and D. Schafran. In 1996 he won first prize as a virtuoso at the Geneva Musical Academy under the guidance of Daniel Gronsgurin. Starting in 1995, he held the position of primary violoncello soloist for the following five years in the "Camerata Bern", with which he toured the world in the company of musicians of great standing such as A. Shiff, H. Holliger, A. Chumachenco and T. Zethmair, while also recording for Decca, Berlin Classic and Philips. In February 2000, he was chosen by MaestroRiccardo Muti to take up the position of first violoncello in the Scala's Theatre Orchestra. He has always been strongly committed to developing his repertoire of chamber music. He also teaches at the "Accademia di Perfezionamento" for the Scala's orchestra professors. 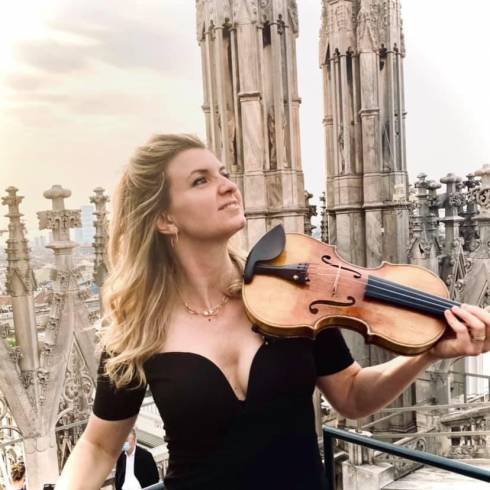 Born in Bologna, she graduated with full marks in violin in Milan at the “G. Verdi ”and in viola in Piacenza at the“ G. Nicolini ". His studies continued in Geneva with C. Romano, at the Accademia Chigiana and with G. Carmignola and F. Gulli, always obtaining scholarships and awards. In 1997 he performed Beethoven's Concerto for violin and orchestra in the Verdi Hall in Milan and won the second prize at the Vittorio Veneto Violin Festival. Winner of scholarships, she attended F. Manara's lessons at the "L. Perosi "in Biella, and won the third prize at the International Competition of the same name. She was the First Violin of the Accademia della Scala Philharmonic Orchestra, giving concerts in various Italian cities, conducted by W. Sawallisch, I. Karabatchevsky, I. Temirkanov. She was a student of A. Chumachenco, graduating from the "L. Perosi ”in Biella (full marks and special mention by the Jury). In 2001 he won the International Competition of the Teatro alla Scala chaired by Riccardo Muti and is a permanent member of the Orchestra in the row of First Violins. As a solo violist he performed Mozart's Sinfonia Concertante with the Regional Orchestra of Tuscany. He won the “Barbirolli” prize at the ninth edition of the “Lionel Tertis” International Viola Competition (Great Britain) awarded to the competitor with the most beautiful sound. 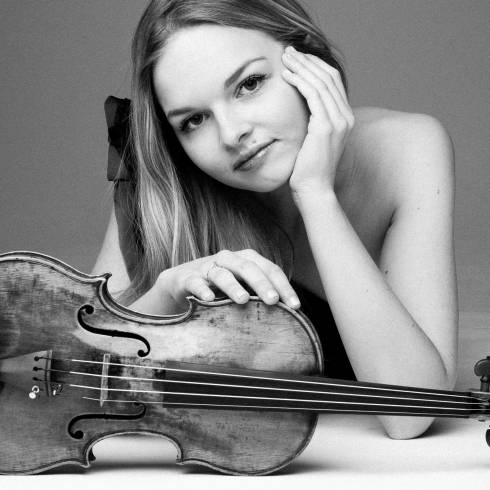 Laura Marzadori joined the Scala Theatre Orchestra as leader violin in 2014, at just 25 years. Before taking up this position she played only as a soloist and as a chamber music violinist, never in an orchestra. However, the commission members with Daniel Barenboim as its president, unanimously elected her as the Concertmaster. In this role she has already worked with some of the greatest conductors in the world: Barenboim, Chailly, Gatti, Harding and Pappano.She began studying the violin a few months before her fourth birthday with Fiorenza Rosi, a teacher of the Suzuki method. At age 10 she studied for one year with Professor Enzo Porta, great violinist and pedagogue, before entering the Conservatorio G. B. Martini in Bologna from where she graduates magna cum laude in October 2005.Laura also studied until the age of 17 with Marco Fornaciari - for many years violin soloist of the Claudio Scimone ensemble “I Solisti Veneti”.In 2004 she won the "Andrea Amati" National Contest for Young Violinists. The chairman of that jury was the famous violinist Salvatore Accardo who took her on to his prestigious international courses at the Stauffer Academy in Cremona and at the Chigiana Academy in Siena where for two consecutive years she was awarded the Honour’s Diploma granted to the best students.In 2006 she attended a one year masterclass with Giuliano Carmignola as part of one of the OrchestraMozart initiatives under artistic direction of M° Claudio Abbado.Between the ages of 17 and 20 she studied, for three years, with the renowned violinist Pavel Berman at the International Academy Incontri col Maestro in Imola (Italy).Since 2008 she has been studying with the great violinist Zakhar Bron and attended his violin class at the Zürcher Hochschule der Künste in Zurich for two years.In her teens she won many prizes including the National Arts Prize (president of the jury Uto Ughi),the aformentioned "Andrea Amati" contest, the second price at the Postacchini International Competition together with the special award for the best execution of Nicolò Paganini’s Capricci. In 2005 she won the most important Italian Violin competition: the “Città di Vittorio Veneto” contest as well as the special mention Gulli Prize for the best Mozart execution. Over the last two years she has been laureated at both the Sion International Violin Competition and the Buenos Aires International Violin competition.She is a passionate chamber musician: she has collaborated with such extraordinary musicians as Accardo, Berman, Filippini, Bruno Canino, Meneses, Antony Pay, Lucchesini, Giuranna - with whom she performed the Bach Goldberg variations of the string version by Bruno Giuranna- and recently also with many colleagues of the Scala Orchestra. In 2013, as a member of the AMAR piano trio with Leonora and Ludovico Armellini, she was awarded the prestigious “XXXII Premio Abbiati” dedicated to Piero Farulli, by the Italian National Association of Musics Critics.In 2010 she performed the world premiere of Ottorino Respighi’s violin concerto in New York, and recorded it for the NAXOS Label. The recording, released in the USA in May 2011, was well received by critics. In April 2012, she played Italian première of the Violin Concerto op.26 by Ermanno Wolf-Ferrari with the “Orchestra Città di Ferrara” conducted by Marco Zuccarini. This performance was recorded live by the TACTUS label and the CD was released in January 2013.In the same year Shlomo Mintz invited her to record two violin lessons with him for his Online Music Academy; she also recorded a lesson with Salvatore Accardo at the Stauffer Academy in Cremona for the Dynamic Label.